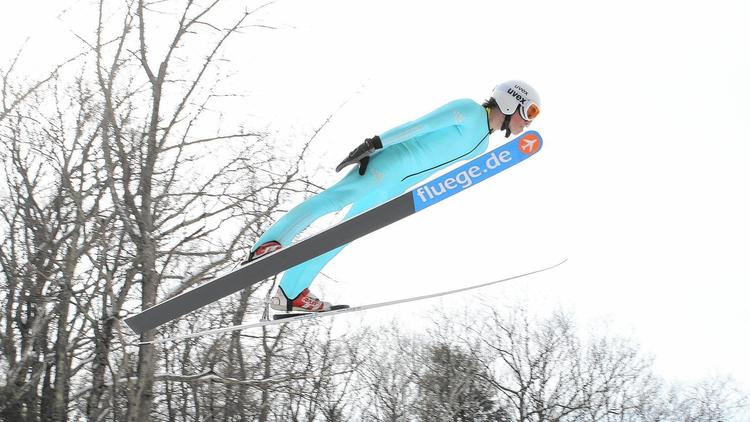 For 89 winters, defiers of gravity from across the country have converged in the northwest corner of Connecticut at the ski jumps in Salisbury. The town of 4,000 has hosted an annual competition — known in recent years as JumpFest — since the completion of its 70-meter ski jump in 1926.

Twenty- and 30-meter jumps round out the facilities at Salisbury’s Satre Hill, named for a Norwegian immigrant, who according to legend, launched from the top of a barn to introduce the town to the sport of ski jumping. Some 200 residents are said to have taken in that inaugural stunt, and spectator interest grew from there.

The SWSA is an entirely volunteer organization that in addition to making snow and maintaining the jumps, sponsors downhill and cross-country skiing programs through local schools. They also plan and run JumpFest.

Last year, there were roughly 5,000 attendees over three days, a record for the event, which hopes to attract still larger crowds to its main events Feb. 6 to 8. The 10-day winter festival actually kicks off Friday, Jan. 30, with various events such as a restaurant week, art shows, an autocross day at Lime Rock and a trivia night.

The SWSA has used a growing number of side events to lure fans during the actual JumpFest. Bonfires and a chili cook-off will warm spectators on Friday night, Feb. 6, when the competition kicks off with target jumping, in which competitors aim for a target in the landing area. Then it’s time for the human dogsled race. Teams of six don costumes and pull a rider in a sled of their own construction.

“One team has been in it every year with a viking theme,” says Willie Hallihan, a director of SWSA.

The next morning, junior jumpers take to the 20 and 30-meter jumps. The lengths refer to how far a jumper can expect to fly. The 70-meter jump towers 350 feet above the landing area, with the smaller jumps rising 75 and 120 feet. Competitors are judged on both distance and form.

As the 2014 Winter Olympics kicked off in Sochi, Russia, the Salisbury Winter Sports Association hosted a winter sporting tradition of its own: the 88th Annual Salisbury Invitational Championships on Satre Hill in Salisbury. The event included 20 and 30 meter ski jumping competitions for… (Alex Syphers | Special to CTNow.com)
At last year’s JumpFest junior competition, Ella Rydingsword, 9, was the first to launch because she was the youngest competitor. She says the crowd adds pressure, but in the end, JumpFest is her favorite day to jump, and this year, she likely won’t be the youngest. Her six-year-old brother Fischer recently took his first jump and may participate. Older sister Cora will jump as well, and older brother Orrin has jumped previously.

Ella can get nervous during her two seconds of hang-time. “Sometimes you feel a little scared, because you feel like you’re gonna fall,” she says, “but then, you make it.”

It’s a good thing too, because the landing isn’t exactly a pillowy snow mound. “At a ski hill, when you get fresh powder, that’s prized,” says Hallihan. “At a ski jump, it’s the opposite. Any fresh snow has to be removed with shovels. The landing is almost like a glass finish, and it’s rock hard. It’s man packed by people with skis sidestepping up and down the hill.”

Soon after Ella, Caleb Gilbert, 13, will find himself on the in-run, the place skiers begin their descent. Caleb remembers learning to jump by starting in the middle of the decline. “By the time I got to the top,” he says, “it wasn’t crazy. It was like, ‘I can do this now.'”

Next year, Caleb hopes to take on the 70-meter jump. For now, he’ll leave that to older teens who compete in the Eastern US Ski Jumping Championship on Sunday, Feb. 8, at 1 p.m.

The grownup jumpers vie for the Salisbury Cup on Feb. 7 at 1 p.m.. The chance to compete on a 70-meter jump is somewhat unusual. “It’s a coveted cup,” says Barker. (Courant file photo)
Among the jumpers in the masters class will be Mark Breen, who in the 1980s, competed in several national championships and the Olympic trials. Watching the 2006 Torino Olympics on TV inspired Breen, 46, to return to jumping and begin volunteering and coaching at Salisbury when not serving as a New York State Trooper.

The SWSA raised three-quarters of a million dollars and rebuilt the big jump on Satre Hill in 2011 in order to host the Junior National Championships that year (the competition will return to Salisbury in 2016). As construction on the new jump neared completion, Breen set his sights on a small piece of Salisbury history. “I knew someone would have to take the first jump,” he says, and he managed to convince everyone to let it be him.

So what does it feel like to go off one of these jumps? “It’s a noticeable sensation of the air being an entity that you can sense on your body,” says Breen. “It’s there. It’s thick. You are definitely riding on it.” The thrill is somewhat counterbalanced by the long climb up the stairs for the next jump.

A ski jump simulator will be available Saturday and Sunday, Feb. 7 and 8, for kids who want to see if the sport might be for them. For those who prefer feet on the ground, there’s an ice-carving demonstration in LaBonnes Square on Saturday, Feb. 7, and a leaf blower “air-hockey” game played at Camp Sloane YMCA at 10 a.m. that day, and other free events listed at awinterfestival.com.

The Salisbury JumpFest competition runs Feb. 6 to 8. Competition starts at 7 p.m. Friday and 9 a.m. Saturday and Sunday. Tickets each day are $15. The Snow Ball is at 8 p.m. Saturday, and tickets are also $15. JumpFest events elsewhere in Salisbury run Jan. 30 to Feb. 8. Information: awinterfestival.com.