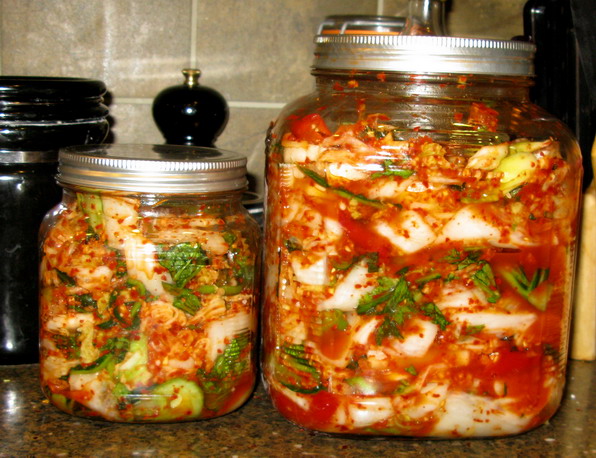 “Kimchi is popular in New England as well as Korea”

Click the link above to view the full version printed in the Lakeville Journal on January 15,2015

FOOD FOR HEALTH
by: CYNTHIA HOCHSWENDER

It would seem that there is no escaping kimchi, the ubiquitous and fragrant Korean specialty food. And I’m not just saying it’s ubiquitous in Korea (where it’s apparently eaten at three meals a day); it also seems to be inescapable even here in New England. Whoever still thinks of this as a Yankee pot roast and white bread region is wrong.  I am not a big fan of kimchi.  I think it’s smelly and kind of, well, red. I became intimate with it when my daughter was a boarding student at the Marvelwood School in Kent. There are many wonderful and talented Korean students who attend the school.  They fill the dorm refrigerator with kimchi, and heat it up in the dorm microwave. They leave their unwashed bowls, red-stained and glistening with oil, in piles in the bathroom. It
is unattractive.  But this is a food that is more beloved than any other food I can think of, other than perhaps white rice or white bread, which are essentially the culinary opposites of kimchi. They are highly anonymous. You could probably eat them three times a day and not even notice it.  Not so with kimchi.  There is no way that you had kimchi for breakfast but didn’t realize it.  In spite of my prejudice against kimchi, I have to acknowledge that any food that is that popular has to have something going for it.  No doubt it is an acquired taste, something you love deeply if you grow up eating it (three times a day).  It’s also so healthy that the National Institutes of Health has an article about it posted online at the U.S. National Library of Cowin learned while trying to prepare this dish for a summer lunch party).  The cucumber recipe, adapted, is below. You can find fish sauce at most area gourmet shops and at stores with a good Asian foods section such as the Sharon Farm Market. I’ve followed Cowin’s advice from the text of her cookbook and have substituted sriracha sauce (also available at most gourmet stores)for Korean red chile flakes.  This isn’t the real and nutritionally beneficial kimchi, which is made of cabbage mixed with hot chili flakes and then fermented (sometimes, according to legend, it is buried underground while it cures).  If you want real kimchi, Hosta Hill farm in Stockbridge, Mass., makes an award-winning version that it sells online (www. hostahill.com). You can also order it at The Stagecoach restaurant in Sheffield, where chef Kyle Pezzano adds it to swordfish tacos.  Kimchi is popular in New England as well as Korea Medicine. There is a long and pretty impressive list of health benefits that come from eating kimchi: “Health functionality of kimchi, based upon our research and that of others, includes anticancer, antiobesity, anticonstipation, colorectal health promotion, probiotic properties, cholesterol reduction, fi brolytic effect, antioxidative and antiaging properties, brain health promotion, immune promotion, and skin health promotion.”  Hard to argue with all that.

Normally this column includes a recipe, but I wouldn’t dare to post a kimchi recipe; it seems like one of those foods where every family has its own favorite way of making and eating it. The chef David Chang of Momofuku fame has a recipe you can find online that he adapted from one his mother developed; it includes the soft drink 7Up. Chang also has a recipe for quickie kimchi cucumbers that he shared with my friend Dana Cowin, editor in chief of Food & Wine magazine, for her new cookbook, “Mastering My Mistakes in the Kitchen.” She and Chang offered one pro tip for making kimchi: Don’t use too much fish sauce. “Used sparingly, fish sauce adds an umami flavor. Overused, it leads directly to the trash” (as No doubt it is an acquired taste, something you love deeply if you grow up eating it (three times a day).