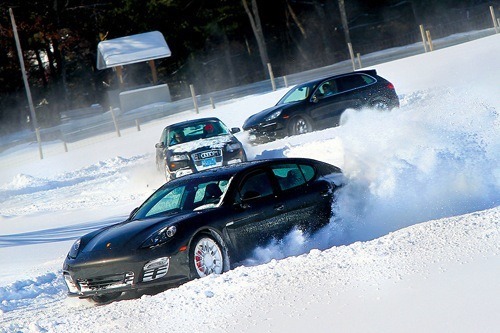 LAKEVILLE– It is known as a popular summer stop, but Lime Rock Park is now offering another avenue for driving.  There is going sideways, and then there is going “slideways.” Welcome to the world of “WAX” or Winter Autocross.

“It’s basically the same thing as summer autocross,”said Lime Rock Park’s Rick Roso, “But it’s in the snow. You’re doing it at 1/3 the speed you would do it on the dry (track).”

The winter autocross program began this month and offers drivers the chance to bring their own car and take to the autocross course. Snow is provided both by mother nature and snow guns that have blanketed the course.

“You’ve got to dance with the car,” said instructor Eric Ives, who noted that driving on a snow-lined course has its practical applications for driving around the state these days. “Always look away from what you don’t want to hit,” he said.

Winter Autocross at Lime Rock Park runs Fridays and Saturdays through mid-March. It costs $300 for access to the auto cross ours and instruction, and you need to bring your own car. It’s recommended that you have snow tires.